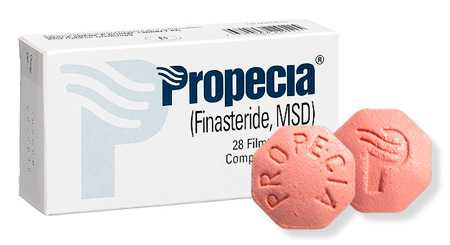 How does this drug work ? What are its effects ?

The FDA (U.S. Food and Drug Administration) approved Finasteride 1-mg/day (Propecia®) for treatment of androgenetic alopecia in men. After a two year period, 83% of men taking Finasteride noticed either stability or hair regrowth. The other 17% continued shedding hair despite taking the medicine.

By inhibiting DHT production, Finasteride can stimulate hair growth for a great number of men facing mild or moderate hereditary baldness. The drug’s effects generally manifest themselves after three months of treatment. The drug’s effectiveness can vary : in most cases hair loss ceases and regrowth can be observed, none the less never to its full extend. Moreover, these new hairs will shed within the year following discontinuation of the treatment.

The drug causes a significant decrease in DHT levels in the scalp as well as in the blood. Its effectiveness correlates with these two effects. For patients using Finasteride there is a decrease in DHT levels of 70%. At the same time, testosterone levels slightly increase by 10% without exceeding normal limits.

Finasteride was originally developed in 5-mg/day doses by the pharmaceutical company "Merck Sharp and Dohme" for treatment of prostatic hyperplasia, under the brand name of Proscar®.

How to take this medicine?

To be effective, the recommended dose of Finasteride is 1 mg daily. The medicine needs to be taken at the same hour each day, with or without food. Important to point out : this drug needs to be taken on a consistent basis.

The dose required for a particular individual depends on a large array of factors like weight, illnesses and the intake of other drugs. If the doctor recommended a dose different from that which is indicated, it’s important not to modify the way the drug needs to be taken without consulting with your doctor.

In what cases is the use of this medicine inadvisable ?

Finasteride is contra-indicated in :

What are possible side effects for Finasteride ?

The bellow-mentioned side effects don’t necessarily manifest themselves in all persons taking this drug. If you are worried by this medicine’s side effects, please consult with your General Practitioner (GP) about the risks and advantages related to this medicine.

The following side effects can subside as the organism becomes accustomed to the medicine. Consult with your GP should they persist or become incommoding.

When to stop using Finasteride and to consult with your general practitioner ?

Immediately consult with your doctor when experiencing one of the following side effects :

Many patients have concerns about Finasteride’s side effects with regard to sexual performance. In a clinical trial, 1,8% of tested patients experienced side effects causing decreased sexual libido compared to 1.3% when performing a placebo test (psychological effect). These side effects, generally occurring shortly after taking Finasteride, always disappear upon cessation of treatment (after a few weeks or occasionally longer) as well as for men (58%) that continue to take Propecia.

In case of discontinuation of Finasteride or Minoxidil treatment, you only lose the hairs that were regained or protected by the drug and no other. You will return to your previous level of baldness as if you had never used Finasteride.

Taking Finasteride interferes with prostate cancer detection. It is vital to inform your doctor during a follow-up examination so he can take into account the effects Finasteride can have on the prostate-specific antigen protein (PSA).

Are there other precautions or warnings for this medicine ?

When absorbed by the organism of a pregnant woman, Finasteride can provoke external genital organ anomalies in male foetuses. Crushed or cut Finasteride pills should never be manipulated by women that are either pregnant or intend to be, this for reason of absorption of Finasteride through the skin into the blood vessels.

Several questions from patients addressed the risk for pregnant women or women planning to conceive with regard to their partner being under the effects of Finasteride. Studies on chimps subject to an exposure 120-fold superior than through sperm from men taking 5mg/day revealed no abnormalities. Nonetheless, to the benefit of peace of mind and to avoid a theoretical risk, affected men can cease taking the medicine and/or use preservatives.

As Finasteride is broken down in the liver, it needs to be administered with caution to patients suffering from liver disease.

The use of Finasteride has not been studied in men of old age showing signs of common baldness.

Finasteride should never be administered to children.

Are there other agents that could interact with this medicine ?

Bring all over-the-counter or prescription medicines you might be taking to the attention of your doctor as well as any herbal medicines. Also show all dietary supplements. As caffeine, alcohol, nicotine from cigarettes and illegal drugs can potentially modify the activity of many medicines, you need to inform your GP when consuming any of above.

If you wish , you can proceed with a face-to-face consultation ?
Other questions ?

Please contact us so we can help you as soon as possible.

By pursuing your navigation on this website, you accept the use of cookies to purpose you a better navigation.